In 1979 Jim and Faye Lacefield bought fourty acres in a part of Colbert County, Alabama which can only be described as untouched. A natural canyon with 350-foot limestone walls in some places, the area wasn’t much good for most settler activity. The sheer limestone cliffs and overhangs however, had some prehistoric appeal. Archeologists have discovered pretty clear evidence of a thriving Paleo-Indian culture dating back 10,000 years very near the Cane Creek Preserve.

Have you located your hiking boots yet?

Over the years the Lacefields have added acreage. Today’s incarnation, frozen in time, should be a delight for hikers, naturalists and even those looking for a Sunday afternoon stroll. Today’s 700-acre preserve boast’s vistas guaranteed to make you catch your breath like the “Point” and the “Citadel.” Rock formations like the “Hogback” and the “Fin” are just the start of a geologic trip back in time. Footbridges cross Cane Creek and its tributaries to give the most perfect view of numerous waterfalls, gurgling brooks and thunderous clear streams which inspire a quiet reflection not approached anywhere else.

So, are you ready to take a trip with me? 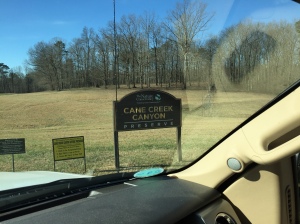 We began the trip at the main parking area. We stopped for a minute to say “hi” to Jim who was sitting in a rocker on the upstairs wraparound porch of the Lacefield home. We set out immediately a few minutes after 10:00. Our first stop is known as the Waterfall. The trail is well kept, well marked and a pleasure for the most directionally challenged. Today however, there is still a little ice on the trail and it is a little treacherous. The view is well worth the extra surefooted effort. We have had more rain than usual and on this day it seemed there was another breathtaking waterfall on every corner. This one still wins the prize. After a small side trip we were back on the Shelf Trail.

I recommend Cane Creek Preserve for a winter romp because the views will knock you out. With the leaves off, there are postcards everywhere. The shelf trail gently descends into the Beaver Pond Wetlands and the beavers had been busy. The beaver family which resides in this area might be a little lazy or smart or both. They have learned to use Jim’s footbridges to weave their logs and mud into a work of engineering art. We found a good ford and headed for Delony Hollow.

Once out of the bogs, the trail hugs the limestone bluffs again. There are tons of rock shelters to explore and I found myself wondering about the ancient peoples who traversed these same hills. The trail gently ascended to an outcropping limestone formation named the Fin. Of course it is the Fin. We took a second to climb the less dangerous section and took a few pictures. I must restate, with the leaves off, pictures kind of take themselves. You just have to get in the way of beauty for a few seconds to see Wagnon, Wheeler and Hawk Pride mountains in the distance. We stopped for a rest at a fire pit at the north end of the traverse before moving on to the Sinks. 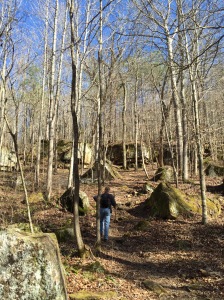 After the Sinks came the Pancake Boulders. I wish I had stopped to take some pictures but, we had picked up the pace. The trail back descended to the lowest point of the hike at a little less than 500 feet in elevation. The trail hugs Cane Creek with lots of bridges and the occasional privy which I greatly appreciated. The running gurgling water always brings peace and privy visits. Enough lollygagging, it was time for the leg burner.

Saving the Steep Trail, or what I affectionately call the Leg Burner, for last somehow seems to be a tradition. Even avid hikers will find the leg burner challenging as they ascend almost 300 feet in less than a quarter-mile. You can organize your hike so that you descend this section early but, I would not recommend it. It is quite uncomfortable and somehow goes against my nature to voluntarily walk off a bluff. With leg muscles burning however, the reward is on the way. 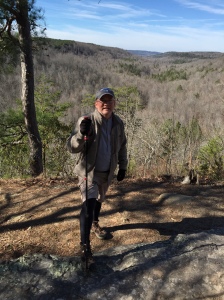 The reward is the Point. Cane Creek Preserve has tons of named and unnamed overlooks like the Citadel, the Fin and others but, the Point is the pièce de résistance. From the Point you see most of the Preserve with Hawk Pride Mountain in the background. Like the rest of the Preserve, there is a perfectly placed bench for contemplation. Someone will almost certainly be by in a few minutes which will snap a picture of you and your fellow hikers. For some reason, I always feel compelled to do so. Life is short and we never know if we will need a fresh picture of the Point.

By the time we were back to the main parking area, Faye had joined Jim on the porch. It was Sunday afternoon and there were 30 or so vehicles in the parking area. The breath and depth of geography and people represented always amazes me. There are lots of Tennessee, Mississippi tags but, it is always surprising to see New York or Canadian tag. We returned our walking sticks and maps as we signed out. By the way, please sign in and out. Wanderers frequently get lost and the Lacefields would like to send their Saint Bernards if you come up missing…just kidding. We, as always, shared our gratitude with the Lacefields as we said our goodbyes. 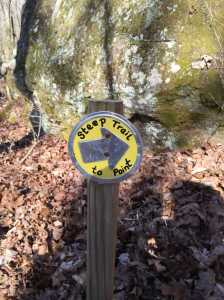